The impossible trinity, otherwise known as the impossible trilemma or the Unholy Trinity, is a concept in macroeconomics that states it is impossible for a country to have all three of the following at the same time:

This concept was developed in the 1960s by John Flemming and Robert Mundell; they based it on two things, a study of several central banks and governments throughout history who tried to implement all three simultaneously and the uncovered interest rate parity.

Trillemas have been used as thought experiments as far back as Ancient Greece to describe situations that have three equal solutions to a complex problem. Within blockchain design, there exists a trilemma between decentralisation, scalability and security which we have written about here and here. However, it is arguable that the impossible trinity is the most well known in modern times.

The following diagram can help visualise the impossible trinity: 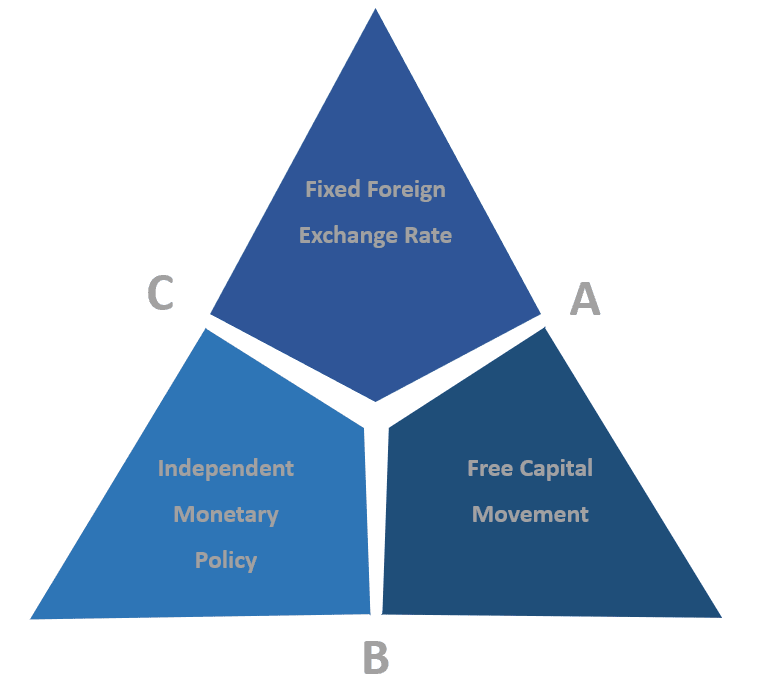 When central banks have to make fundamental decisions about managing international monetary policy and goals, they can only choose one side of the triangle. This is because each side of the triangle is mutually exclusive to the others. As a policymaker, you can only satisfy two out of the three goals as the third will always contradict the first two. If you want to accommodate free capital movement and control your own supply of money, you cannot fix exchange rates. If you set exchange rates and control your supply of money, you cannot accommodate free capital movement. Finally, if you control capital movement and fix exchange rates, you cannot control the growth supply of your money.

Here is a practical example of the above:

The tradeoffs presented by this trilemma obviously profoundly affect the decisions you make as a policymaker. The challenge comes with deciding what side of the triangle to pursue. We have recent examples of all three, and this can help us better understand why central banks around the world are currently in the position they are in.

Side A: A stable exchange rate and free capital movement

The Eurozone and the Gold Standard are excellent examples of this side of the triangle. This has allowed the Eurozone as a whole to flourish; however, because specific countries within the Eurozone can’t control their own monetary policy, they have run into problems like Greece did in its financial crisis. It was a deep-rooted problem that has taken years for Greece to overcome, and they have had to rely heavily on the ECB to help meet their debt obligations. This also, as a result, has placed additional stress on the Eurozone as a whole.

Side B: An independent monetary policy and free capital movement

This is the model most countries in the world currently work on. It has allowed them to maintain monetary sovereignty and try to encourage international trade. They have the freedom to increase or decrease interest rates. However, this has resulted in many countries artificially manipulating interest rates to remain more competitive globally and stimulate their economies. A big problem that they have run into is that once interest rates hit zero, central banks next biggest tool is quantitative easing, or the monetisation of debt. Since 2008 this has resulted in a significant increase in the balance sheets of central banks globally, which currently sits close to $30 trillion. This puts further pressure on the economy. 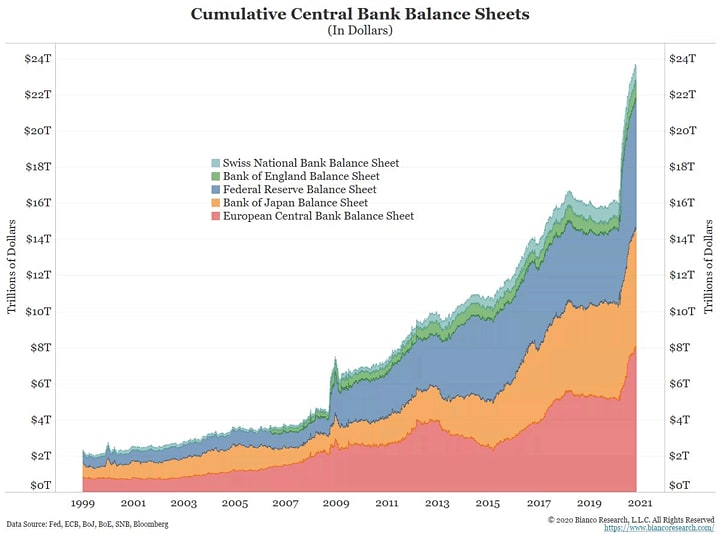 Side C: A stable exchange rate and independent monetary policy

There are a few examples of this in practice today. However, the biggest global example of this in practice was Bretton Woods. Under the Bretton Woods agreement, America would adopt a “Gold Standard”, and others would, in turn, peg their own currency to the value of the dollar at a fixed rate. However, this didn’t work as America started issuing more Dollars than they had gold reserves as they wanted to be able to influence their monetary policy. This resulted in a breakdown of the monetary relationship between America and many other world superpowers. In 1971 America went off the Gold Standard and instead focused on their own monetary policy and free capital movement.

All these options and examples above are characterised by a tradeoff. In reality though, most countries and their central banks have implemented a combination of all three in some way or another. While most have chosen independent monetary policy and free capital movement, they have also attempted to maintain a stable exchange rate. When remarking on pursuing all three policy goals of the trilemma, Milton Freedman, the famed economist, once said, “you get a pressure cooker with a disabled safety valve. It is simply not sustainable.”

There is not necessarily one correct answer; it really depends on a country’s own unique circumstances. However, pursuing all three is just not going to work.

But where does bitcoin fit into the equation? Bitcoin falls under side B. Bitcoin has implemented its own monetary policy and allows for free capital movement. It has forgone a stable exchange rate, and as a result, bitcoin’s price is a function of demand relative to supply. This also helps explain bitcoins volatility. One thing also to note is that bitcoin, while adopting its own monetary policy, is currently unique in that it is a non-discretionary form of monetary policy. No other country in the world presently has that type of monetary policy in place.

While all currencies are subject to the same rules, there is a way that you can ensure there is at least a high chance of long-term viability for your currency. That is to only pick two sides of the triangle. Central banks across the globe have been trying to pursue a combination of all three in some capacity, resulting in the situation we are in today. While still to be proven successful, Bitcoin has at least decided only to pursue two sides of the triangle.

About the Author: brett