This week, we will review the Chainlink project, a core asset of the Etherbridge Fund. Part of the Fund’s mandate is investing in what we consider the core infrastructure required to establish a fully functional digital economy. We will explain what Chainlink is and why it’s important, review its year so far, and where it plans to go in the future.

Historically, blockchain-based networks and the smart contracts that run on top of them couldn’t support native communication with external systems. This limitation has significantly reduced the potential that smart contracts had until now. Chainlink is what we call an Oracle. Oracles connect the world to the blockchain. By providing connectivity to the outside world, they vastly increase the utility and usability of blockchains and smart contracts. Several centralised solutions provide these services, but before Chainlinks creation it wasn’t possible to do in a secure, decentralised, trust-minimised way. Chainlink is also blockchain agnostic which means it can provide data to almost any blockchain. So far, projects like Ethereum, Bitcoin, Polkadot, Hedera Hashgraph, Cosmos, Zilliqa, Tezos and many more provide support for Chainlink.

One of Oracles’ main value drivers will be the number of partnerships and integrations that it can make. As more people use Chainlink’s data, the more durable it will become through network effects. Chainlink has already partnered with some well-known traditional companies such as Google, SWIFT, Oracle and more. So far, in 2021, Chainlink added 128 companies and projects to its list of partners to bring it to a total of 500. This currently eclipses any other oracle project in the space and further helps Chainlink cement its position as the industry leader. The image below is just a few of the partnerships they have formed, but you can find a full list here.

Chainlink has seen further adoption within 2021. The total number of unique addresses that hold LINK increased from 307 000 to just over 496 400. This represents an increase of 62% over the year and is currently the highest it has ever been. This is a healthy sign of adoption and usage of the network. Another exciting thing to note is that the adoption rate also seems to be increasing; in Q4 of 2020, it was only 28% (67 700 additional users). The increasing rate of usage also bodes well for fundamentals as we advance. 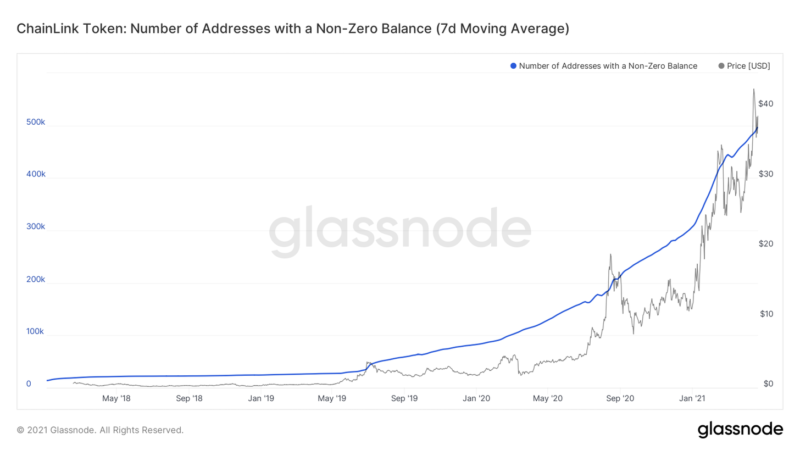 A relatively new metric, Total Value Secured (TVS), is the value of the smart contracts that Chainlink is responsible for providing price feeds too. This metric is important as it underpins a smart contracts ability to maintain integrity and function effectively. The more value secured by the Chainlink Network, the greater confidence people have in the oracles ability to feed reliable data into their smart contracts. Currently, Chainlink is responsible for providing the price feed to $7.2 billion worth of smart contracts on Synthetix, AAVE and Nexus Mutual. The Chainlink team has been working on providing additional data regarding this metric and plans on integrating information from other DeFi protocols soon. We are looking forward to how this metric develops over time.

Chainlink has been making steady progress when it comes to the technology they employ. 2020 introduced exciting improvements, such as proof of reserves and flux aggregators, which have continued to be improved upon in 2021. However, one new improvement got our Technology Advisor, Jonjon Clarke, very excited. The introduction of the Verifiable Random Function (VRF). VRF is a provably fair and verifiable source of randomness designed for smart contracts. This will help developers build smart contracts that need to rely on unpredictable outcomes. It vastly increases the use cases that Chainlink can service. Chainlink’s examples include blockchain games and NFT’s, the random assignment of duties or resources (e.g. assigning a judge to the Aragon Court), or choosing a representative sample for consensus mechanisms.

From the beginning of the year till now, Chainlinks market capitalisation went from around $4.6 billion to around $11.1 billion. An increase of around 150%. It has risen with the whole Cryptoasset market and has managed to hold onto the significant gains it made in the second half of 2020. With the increasing adoption and improving fundamentals, we believe that it should continue to maintain market share and continue its growth going forward. 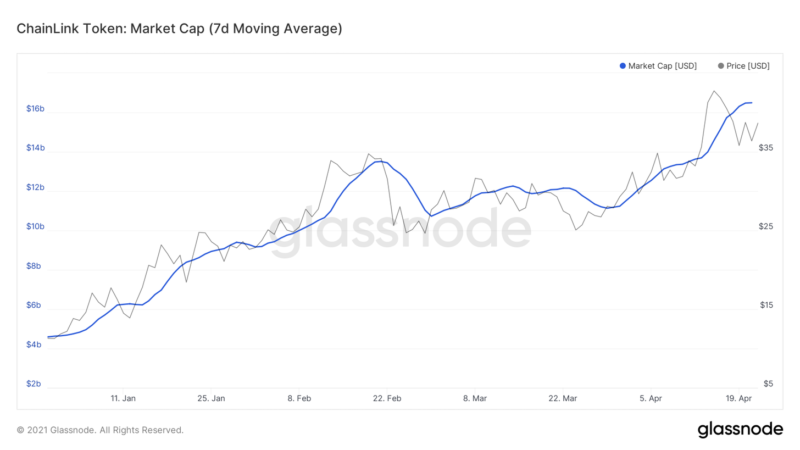 Overall, the beginning of 2021 marked significant progress for the Chainlink project, something we are very excited about.

Since the release of their initial whitepaper in September of 2017, the project has come forward in leaps and bounds and asserted itself as the leading oracle project in the industry. However, Chainlink 2.0 promises so much more.

In the new whitepaper, Chainlink 2.0 introduces a “new architecture for building hybrid smart contracts, where Decentralized Oracle Networks offer key capabilities that blockchains cannot, serving as a secure off-chain computation layer that partly relies on blockchains for security yet operates with the connectedness, feature-richness, and scalability of off-chain systems. The result of this new abstraction layer is a growing suite of Chainlink Decentralized Services that power a vast array of secure, feature-rich smart contract applications capable of supporting a much broader set of users and use cases.” In simpler words however, the dream of Chainlink 2.0 will be to provide a border range of services to smart contract when compared with just its current data delivery service.

In addition to the above and to achieve this, the Chainlink team will focus on six other key areas:

Through greater security and the ability to attract additional users, the Chainlink team believes that it can create a virtuous cycle to strengthen its economy. 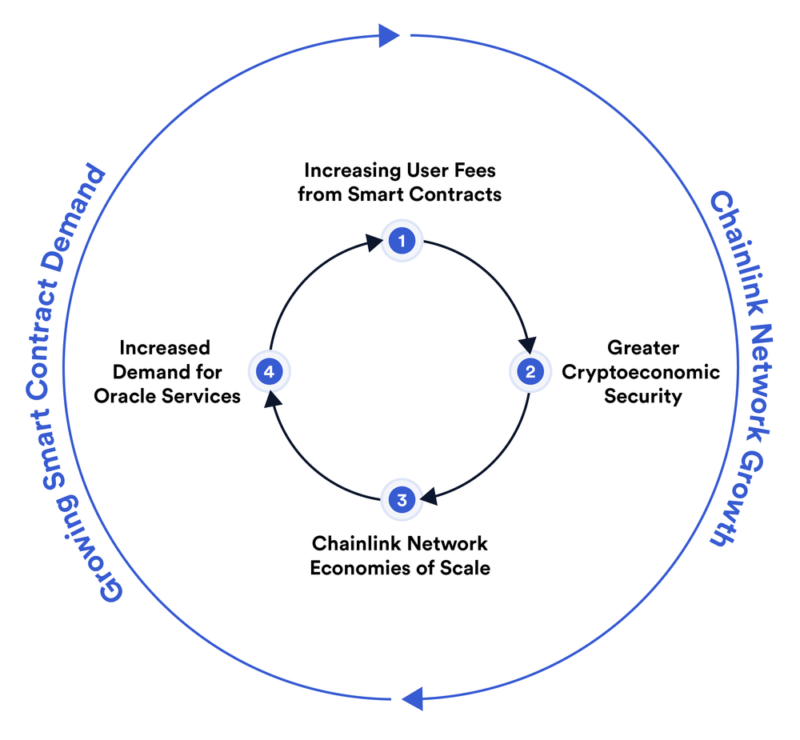 Overall, the Chainlink Network has positioned itself well. We expect to see continued adoption of the network. With the introduction of Chainlink 2.0, we are also very excited to see the new use cases that may be unlocked in the industry and how this will reinforce Chainlinks position as the industry leader.

The future of Decentralised Oracle Networks has never looked so bright.

About the Author: brett