Home/News/Bitcoin and Value
Previous Next

“Bitcoin has no fundamental value” has long been the war cry for many traditional financial participants. This week we thought we could shed some light on this short-sighted mantra.

To highlight the clear value that bitcoin affords, we first need to define what it is we are talking about.

So, What is Bitcoin?

Bitcoin is both a network and an asset. The Bitcoin network is a real-time gross settlement system comparable to Fedwire and Target. Settlement systems are the base layer of any financial system, and they leverage net settlement systems built on top to scale and provide utility to the day-to-day user. The Bitcoin network requires participants called miners to contribute resources in order to process, execute and settle transactions. The process of performing these actions is costly, and miners are rewarded with bitcoin, the asset, for their participation.

Bitcoin, the asset, is a commodity on the Bitcoin network, it can be sent across the world, and you require it to pay the network’s fees. It is fungible, divisible, durable, portable, verifiable, scarce and has the additional properties of being censorship and seizure resistant. Bitcoin also provides the user with high levels of certainty over its future dilution. Unlike fiat money, the issuance of bitcoin is codified and enforced by changes in the difficulty adjustment. This codified approach means bitcoins supply is impervious to changes in its demand.

No one reading this article has witnessed the rise of a market selected form of money; the money we use today is imposed on us and enforced by governments. A leader snapped his fingers and decided, “let it be done” (fiat’s direct translation), that this paper we issue is now money and has value, backed by the promise of our government. It automatically served the role of being a medium of exchange, store of value and unit of account within that economy.

Market selected forms of money are different. They experience an evolution that challenges people’s perceptions of the money/asset. Historically, market selected forms of money have been commodities. Gold is our best example. It initially started as a collectible, became a store of wealth, then widely adopted enough to be a medium of exchange and eventually became the very thing (or unit) we price everything in.

Bitcoin in its early days was merely a collectible that miners earnt for providing work to the Bitcoin network. The reason people wanted this collectible in its early days is different from why they demand it today. Initially, people would mine it or acquire it due to its perceived rarity and uniqueness; some, however, had incredible foresight and realised it may serve the role of money in the distant future.

The reasons people want it now are very different. Demand for bitcoin today is driven by a market need for a non-discretionary, apolitical form of money. The price of bitcoin is merely a lagging indicator of changing assumptions around money’s role in society. Market participants and institutions are buying bitcoin because it is superior to alternative monetary assets.

Even though market participants choose to store their wealth in bitcoin, it doesn’t mean that bitcoin is currently a safe or store of value asset. People are just voting (with their money) that bitcoin will continue to succeed if demand for a non-discretionary apolitical monetary system continues to grow.

Will This Demand Continue?

The great financial crisis was a turning point for fiat money. This event — driven by the actions of irresponsible institutions caused an earthquake in financial markets. More importantly, the event caused interest rates all over the developed world to hit a zero bound. When interest rates hit zero, monetary policy loses its effectiveness and even worse, the cost of money becomes zero. We have seen interest rates continue lower, and in some countries, even go negative. This transforms what is meant to be an asset for the buyer of a bond into a liability. The bond market is breaking in front of our eyes. 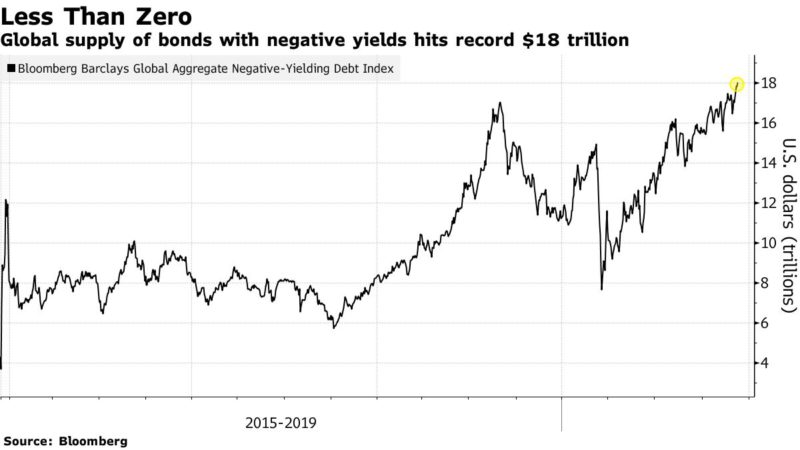 Total negative yielding debt is $18 trillion and growing. According to Bloomberg this means that 27% of the worlds investment grade debt is now sub-zero. Governments simply can’t afford to let rates go up.

Add quantitative easing to the mix, and the storm becomes that much harder to weather. Not only are bonds becoming liabilities, but governments are rapidly debasing the value of their currencies. All these countries clearly believe that they can extend their debt obligations further than their productive capabilities with no repercussions. There is no historical reference for this working over the long run, not one. This is what the Romans, Dutch and English did toward the end of their own empires. But don’t worry, Jerome Powell and Janet Yellen say that this time is different.

This irresponsible discretionary monetary policy has caused the political normalisation of concepts such as Modern Monetary Theory (MMT). It’s basically the idea that governments cannot default on their obligations because they are the sole issuer of their money. And through experiments like floating taxation rates, we can curb the inflationary pressures of printing and giving away money without increasing our productive capacities. Were all of those who came before our current Federal incumbents just too stupid to engineer a financial system where no one needs to go bankrupt, and everyone could be given money in return for no productive contribution to society?

Money is stored time. Stored time is energy, and energy can’t just be created or destroyed; it must be transferred. Policymakers and central bankers are now engaged in an experiment of transferring wealth or otherwise abusing their citizens’ property rights.

This doesn’t mean that fiat needs to fail for bitcoin to succeed. However, bitcoin introduces a discipline check on our current form of money. If governments continue down this path, they build the case for bitcoin. They can force me to pay for my obligations and taxes in my local fiat currency, but they cannot force me to value that money.

Policy decisions, MMT, universal basic income, yield curve control are all drivers for the demand of a non-discretionary apolitical form of money. Bitcoins biggest threat is a return to sound monetary decisions by central banks.

Apparently, the bitcoin network has no fundamentals, and there is no way to assess whether it is functioning correctly, being adopted or used. These are the uninformed comments; they are blatant lies used as an excuse for not doing one’s homework.

Being an open-source network with a transparent and auditable ledger has its perks. It allows participants to assess, in real-time, the state of the Bitcoin network. It’s so transparent that I can follow each and every coin from its genesis to where it sits today. I can map coins based on how long they have been in a specific wallet and identify and monitor accounts with large balances. The transparency is genuinely refreshing.

Metric 1: Are the Number of Users of the Bitcoin Network Increasing?

The key to bitcoins adoption is the growth of its user base. This speaks to bitcoin’s network effect, for every additional user that joins the utility of the network expands. 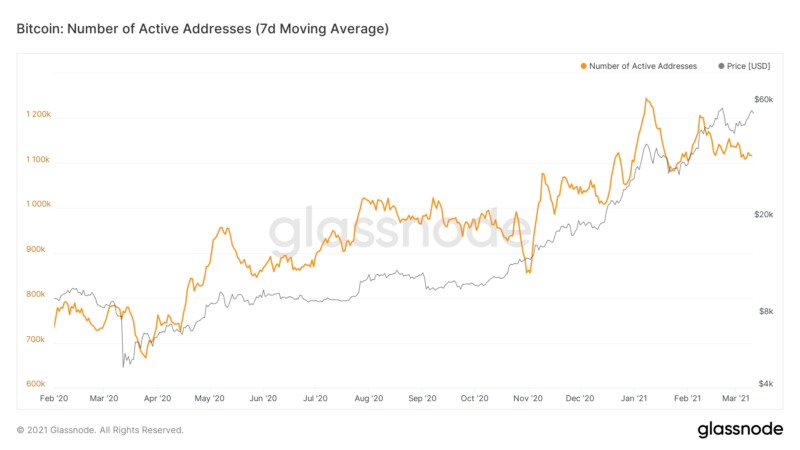 Metric 2: Is the Volume Transacted on the Bitcoin Network Increasing?

Bitcoin the network is a real-time gross settlement system comparable to that of Fedwire. A year ago, the Bitcoin network’s average daily transfer volume was just under $10 billion. This has skyrocketed to over $90 billion in transfer volume per day over the course of the past year. An 800% increase in total value settled on bitcoin per day. 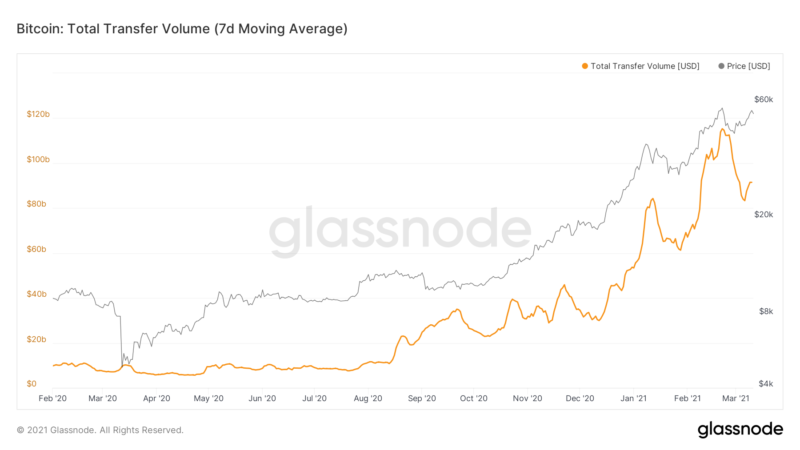 Over the last five years, the Bitcoin network has settled over $22 trillion in transfers, an amazing feat for a 12-year-old software and no central coordinating entity. 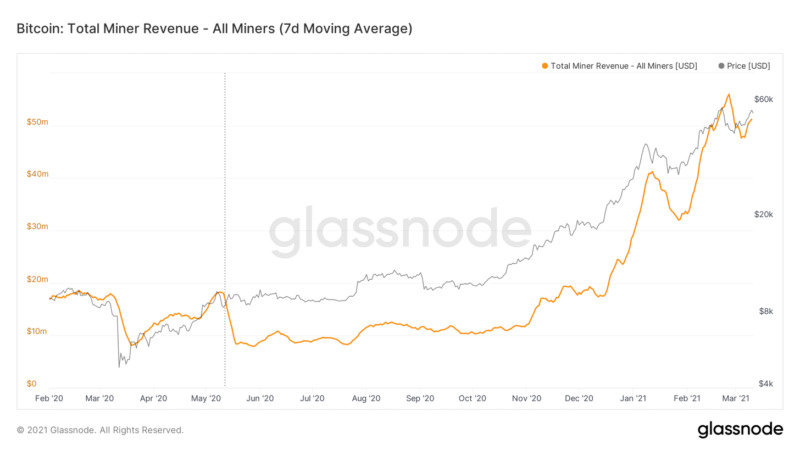 A year ago, total miner revenue per day was $17 million and has grown to a staggering $51 million per day. Growing by 200% over the last year.

Metric 4: Bitcoin is an Open Network. Are Companies Investing in Growing the Network?

Bitcoin’s open network means anyone can invest in making it better. We have seen this happening rapidly, both at a code level as well as in infrastructure that will significantly increase the utility of the network.

At the helm, we have seen Jack Dorsey. Through his company Square, he launched a bitcoin developer grant, open to anyone worldwide who intends to work on the Lightning Network and Bitcoin Core. These grants are valued at around $ 100 000 each. We also saw Jack team up with Jay-Z to start a development fund that will offer grants to a total value of 500 BTC initially to developers in Africa and India. The only rule is that it has to improve the network and cannot be profit-motivated. Other companies that are actively funding the development of bitcoin include Blockstream, Lightning Labs, MIT, Chaincode, DG Lab, Acinq, Bitfinex and several more.

We have also seen companies building on the network, allowing it to scale and provide greater utility to the end-user. One of the most notable entering the space recently was PayPal. In October last year, they announced that they would provide their 300 million clients with the ability to buy, hold and sell crypto. They could also then use this crypto to pay any one of their 26 million merchant partners (PayPal will convert the crypto before it lands in the merchant’s account). We have also seen companies like BitPay partner with AT&T, BMW, Amazon, Microsoft, Google, Twitch, Adidas, Yum! Brands and many others to facilitate bitcoin payments and the purchase of gift cards. Coinbase, a company listing on the NYSE and currently valued at around $100 billion, supports payments plugins for e-commerce giants like Shopify and WooCommerce. Or you have companies like Flexa, which have partnered with over 41 336 locations in the US, including The Home Depot and Whole Food Markets. All these make the day-to-day use and, therefore, adoption of bitcoin as a medium of exchange that much easier.

Companies are rapidly increasing their investments into cryptoasset infrastructure and benefitting the industry as a whole.

Metric 5: Proponents of Bitcoin Claim it is a Store of Value. Is the Market Storing Value in Bitcoin?

The last year has represented a seismic shift in how investor’s view bitcoin. We have seen public compa